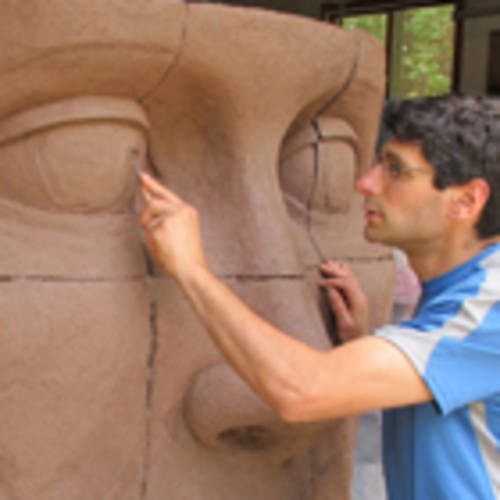 For nearly twenty years, Michael Alfano has created fine art sculptures that are figurative-based, surreal, philosophical, and evocative. He cites his major influences as Salvador Dali, Jo Davidson, and Jean-Antoine Houdon, as well as Buddhist, Taoist, Sufi, and other eastern philosophy and literature. A native of New York, Michael now lives and works in Hopkinton, Massachusetts.

Public Art
Michael’s public art dots the East Coast of the United States. A headline described him as a “Sculptor with a Conscience” for works including:

Galleries, Collections, Awards, and Publications
Michael exhibits at select galleries along the East Coast including Provincetown, Boston’s Newbury St., the Berkshires, New York City, and Asheville North Carolina. Private collections around the world include his limited editions, such as the Buhl Collection in Manhattan. He has won numerous awards at art shows, including the Cambridge Art Association’s “Sculptor of the Year,”. Michael is an elected fellow with the American Artists Professional League, and is in the Copley Society’s selected portrait artist registry. The book “100 Artists of New England,” and “Modern Sculpture,” among others, have featured his work.

Education
Michael first studied at the Art Students League of New York, with an emphasis on life-size sculpture from the model. His formal education continued at Boston University and was augmented by internships with several prominent sculptors. He continues studying with master artists, always seeking to expand his range.