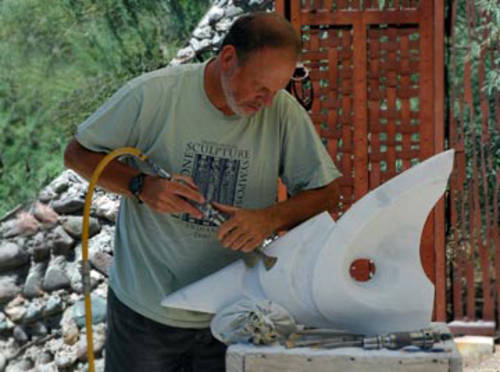 Mark Carroll has been a professional sculptor and in business as The Sculpture Studio since 1985. After teaching high school art for ten years, he left to make a career as a sculptor and established his own studio.  From his start carving small wildlife woodcarvings, his career has evolved into creating large sculptures for corporate office buildings, churches, and hospitals and he has sculptures in private collections across the country.
Mark was born in Buffalo, NY, in 1950 and grew up in a home filled with artistic activity. His father, Richard, a full-time sculptor and master carver in wood and stone, created granite monuments and religious figures for churches. His mother, Mary, a landscape and portrait painter, worked primarily in oils.
He attended East Aurora High School, East Aurora, NY, majoring in Art. In 1973, he received a Bachelors Degree in Liberal Arts, Art, from Buffalo State College, and in 1979, completed the NYS Teaching Certification K-12. He was awarded a Master’s Degree in Art Education in 1985. Mark taught high school art at East Aurora High School, Iroquois High School in Elma, NY, and Lafayette High School in Syracuse, NY.
Starting  his career as a woodcarver, Mark began by carving small caricature figures and duck decoys, then progressed to extremely detailed decorative bird carvings.  After his father died, Mark was asked if he could carve a statue for a local church.  The success of that sculpture soon led to commissions to carve figures for numerous other local churches and hospitals.  For several years he worked full-time sculpting life-size figures in wood.
The experiences that most profoundly influenced his philosophy of life and approach to art were two long-distance hikes on the Appalachian Trail. In 1977 and again in 1986, he walked the entire wilderness trail from Georgia to Maine, a distance of 2,145 miles. The intense experience of walking and living in the natural beauty of forests and mountains for five months at a time left a deep impression.
His interest in nature led to commissions to carve scientifically accurate reproductions for the Buffalo Museum of Science  in Buffalo NY.  The most interesting  project was carving  an  Archaeopteryx, the first bird, with its wings extended in flight.  Measurements for the carving were made by working from a plaster cast of the fossil remains. Next, he carved a 32X enlargement of a Western Conifer Seed Bug for the entomology department. This time he made detailed drawings of the insect by observing it under a microscope.  The project that was the most fun was carving  a baby Wooly Mammoth from a large cherry log.  It was placed in the Discovery Room of the museum for children to climb.
After taking a marble carving class at the Carving Studio in W. Rutland, Vermont, stone carving became a new fascination.  From marble, he went on to learn how to split, carve, and polish granite.  For the past twelve years, Mark has been attending the Limestone Sculpture Symposium in Bloomington IN.  Participants are given a 1,200 pound  block of limestone to carve during the week-long symposium.
A desire to combine different materials prompted an interest in welding.  Combinations of limestone and steel, or granite and stainless steel, were soon added to his portfolio of work.
For the past 20 years, Mark has also been working as a free-lance model maker for the toy industry, especially for Fisher Price.  Mark sculpts the model-masters in clay or wax that are used to make the final plastic injection molds for production.
The early experience of making a wide variety of complex, detailed wildlife and figure carvings, then later the discipline of exacting, industrial model-making honed his craftsmanship and eye for detail. This training provided the necessary technical expertise when he turned to developing a vocabulary of personal artistic form in wood and stone.
Evolving from the realistic to the abstract, his sculpture, inspired by the human figure and the organic shapes of nature, makes an uplifting affirmation of the spirit.
Mark relocated his studio to Cave Creek in January of 2009.