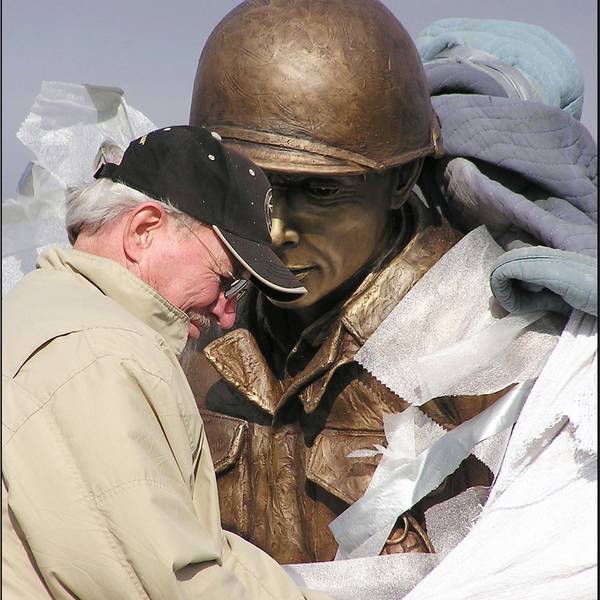 
"Art came calling on me three different times in my life. The first time as a youth of around ten, I got into doing some drawing, encouraged by my Mother, who bought me some Walter Foster books. However, I had other things that commanded my attention at that time and soon lost interest. The second time I was about twenty-five, I did get about half way through the "Famous Artists" correspondence course. The third and last time was in 1978. During a visit to the Gilcrease Museum in Tulsa, Oklahoma, viewing the works of Russell, Remington, W. R. Leigh and other great artists, I found myself alone in the hushed quiet of the museum standing in front of a huge Charlie Russell oil painting. I got up close to the painting and was absorbing the heavy brush strokes and the colors, saw a brush hair embeded in the thick paint when I felt an imaginary tap on my shoulder.  I knew I was alone in the room but I heard someone whisper, "It's time"...... Edd Hayes

With no formal training, Hayes began painting and soon was showing his paintings at some prestigious art shows around the country. Painting though was not fulfilling his needs in the creation of art and soon was seeking other mediums. At this point in his life, this native Texan had already seen experience as a journeyman carpenter, steel worker, oilfield welder, professional cowboy, a field representative and corporate salesman. All of the skills he learned and used in these former professions were about to be used in his next profession...that of a bronze sculptor. In 1981 with no formal art training, mainly through trial and error, Hayes created his first small sculpture, a little figurative bronze. A limited edition of 15 sold out in a short time.

Through intensive self-study of past masters of the sculpted form, including the diligent study of anatomy of both humans and animals, a strong work ethic and a passion for perfection in his sculpture brought Hayes to his first monumental commission. In the spring of 1989, Hayes was commissioned to create a 27 ft. tall bronze monument. A sculpture of Rodeo Superstar Casey Tibbs on the famous bronc, Necktie, titled, "The Champ". The monument became the center piece and the official logo of The ProRodeo Hall of Fame and Museum of The American Cowboy in Colorado Springs, Colorado. Today there are eleven of Hayes' bronzes in their permanent art collection and three outdoor monuments by Hayes at this great museum.

In 1992, for the 60th Anniversary of The Houston Livestock Show and Rodeo, Hayes created "Wild and Free", originally installed at the entrance to the Astroarena. In 2003, this monumental sculpture was relocated to its new home next to Reliant Stadium. The six, 1 1/2 life-size, mustangs, are in a two hundred feet long setting of creeks and waterfalls over huge boulders, landscaped with native Texas plants, wildflowers and grasses.

Hayes is now sought after for his excellence in quality and dependability in creating life-size and larger figurative portraits. His public and corporate bronze monuments number now over forty and include; "The Struggle - Man and Energy", a sixteen feet tall Pegasus, at Energy Plaza in Houston. Under a 300 year old live oak at The George Ranch Historical Park and Museum, a bench with life-size bronzes of "Albert and Mamie George" invite people visiting the museum to sit a while and enjoy; In 2003, a life-size bronze of an "Aggie Redpot", "Aggie Spirit, The Tradition Lives", was installed in College Station, Texas; A 15 ft. tall WW II Monument, "A Call to Duty" was dedicated on Veteran's Day 2006 and is Texas' first monument dedicated solely to WW II Veterans; Two different life-size firefighter bronze sculptures, "In the Line of Fire", for the Houston Fire Museum in Houston and "A Breath of Valor" for a Firefighter Memorial in Baytown that was dedicated in May 2009..

Baylor University Law School commissioned Hayes to create in bronze a life-size figurative portrait of legendary former Baylor Law Professor and lawyer, Matt "Mad Dog" Dawson. Each year, the small bronze maquette of this bronze is given as a trophy to the top aspiring young law student.

A life-size sculpture of founding Pastors John and Dodie Osteen was dedicated on Mother's Day 2009, to celebrate the 50th Anniversary of Lakewood Church in Houston.

A life-size figurative portrait of Thelma Mercer will greet visitors to The Mercer Arboretum in the summer of 2009. If Only, a beautiful mermaid graces the Grand Golf Club in San Diego, California.

A 'larger than life-size' figurative portrait of famed heart surgeon, Dr. Michael DeBakey will be ready for the opening of the new Michael E. DeBakey Library and Museum at The Baylor College of Medicin